This post is in response to a question from Carl Simmons (@Activ8Thinking) about has anyone built a microbit simple neuron.


First attempt - A simple gate using the buttons A and B
So first attempt uses the A and B buttons on the Microbit as the two inputs and it produces T for true and F for false on the LEDs. So the weights produce an AND if the bias is changed from -2 to -1 you get an OR.

So in this case the buttons are removed and P0 and P1 formed the inputs the weights are the same as in the previous example with the bias of -2 being used to produce a AND gate. Programming-wise this is a simpler solution than the previous one, no converting button presses into inputs.


Figures below show the 'neuron' in action.

First, one shows the case when both inputs are '0' ie. not connected to 3v connection. The output is False (F on the LEDs) 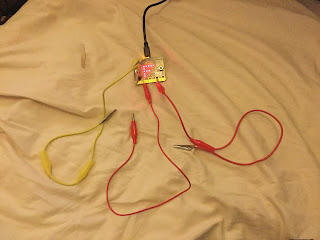 This figure shows when only one input is '1', the output is False. 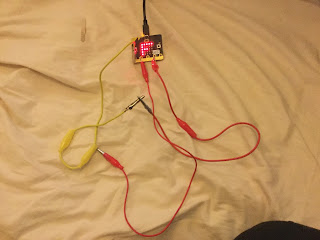 Finally what happens when both inputs are '1', the output goes to True (T on the LEDs). 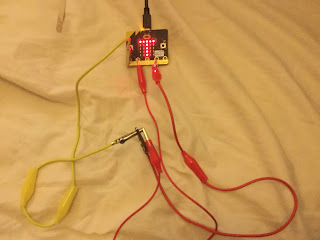 Where next?
Adapting the code so it produces a digital output and then combining them into a small network to solve a problem that a single neuron can't do the Exclusive OR (XOR).

All opinions in this blog are the Author's and should not in any way be seen as reflecting the views of any organisation the Author has any association with. Twitter @scottturneruon
at March 02, 2018

figure 1 An earlier post    https://robotsandphysicalcomputing.blogspot.com/2021/04/junkbots-2-eggbot2.html  discussed the start of the deve...

Robots and Physical Computing by ScottTurner is licensed under a Creative Commons Attribution-NonCommercial 4.0 International License.